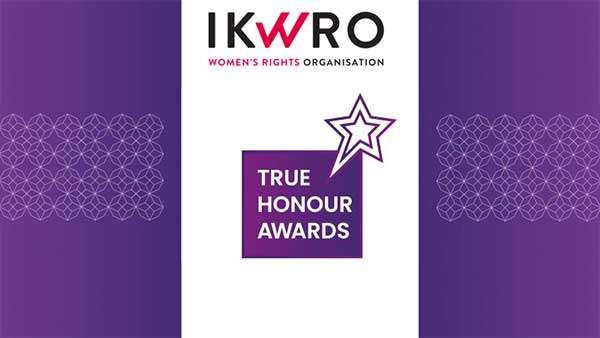 Join us to celebrate International Women’s Day and incredible individuals and organisations that have taken a stand against “honour” based abuse.
By recognising and publicising their outstanding courage and commitment, we hope that we can inspire others to act.
The True Honour Awards also commemorate those whose lives have been stolen by “honour” based abuse, who despite the intention of the perpetrators, will never be forgotten.

IKWRO is a leading charity providing specialist support for women and girls of Middle Eastern, North African (MENA) and Afghan origin, who are at risk of “honour” based abuse, female genital mutilation, forced marriage, child marriage, domestic abuse and other forms of violence against women and girls. They run a refuge and provide advice, advocacy, counselling and training and campaign to improve laws and policies.

IKWRO’s campaigning, which is directly inspired and informed by the women and girls we represent, is succeeding in influencing major strides forward in ending all forms of “honour” based abuse and harmful practices. Our Safeguard Futures Ban Child Marriage campaign, which we lead with our fellow Girls Not Brides UK Co-Chairs, has achieved the Marriage and Civil Partnership (Minimum Age) Bill to ban child marriage in England and Wales with extra-territorial effect. MP’s voted unanimously in favour of the Bill in November 2021 and it is on course to receive royal assent and come into law within the next few months.

IKWRO’s Virginity Does Not Define Me campaign challenges the false and harmful concept of ‘virginity’ and calls for a ban of the harmful practices of virginity testing and hymenoplasty, which perpetuate patriarchal and misogynistic norms, cause trauma and can trigger “honour” based abuse.