Young Voices at the UN

NAWO has accredited young women and men still at school (16-18) to the United Nations’ Commission on the Status of Women for over a decade.

So far we have also enabled over 100 young people to attend and speak at the UN Commission on the Status of Women, as well as other young advocates representing young people at countless events.

UN CSW is the annual policy-making gathering of 187 governments, thousands of non-governmental organisations and leading experts to create an agreement on how best to progress the rights of women worldwide.

The young people who were selected onto this program were trained in human rights and international legal frameworks, public speaking, and write their own blogs, declarations and reports before they’ve even left the UK. 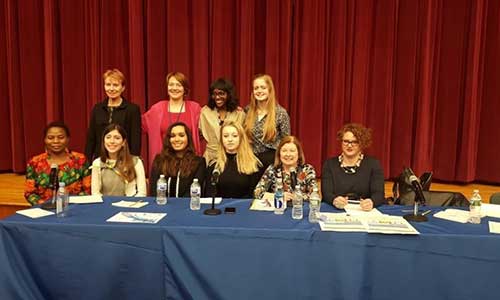 Once in New York they presented their ideas on panels alongside parliamentarians, non-governmental organisations and international experts on issues surrounding women’s lives.

Previous projects achieved have included overhauling sex education curriculums, fundraising money for charity, deciding to volunteer for various organisations aiding women’s human rights, and many other ways of leading change in their communities.

You can see some of the previous delegations’ blogs here (2016/2015, 2014,) and follow them on twitter (@NAWOYouth) for updates on their work, issues surrounding gender equality, young people… anything else they can think of!

Testimonials from the most recent CSW 61: