Every woman has been told, by a family member, friend or colleague, a shocking story, or a terrifying recount of an act of violence or sexual discrimination against another. One in three of them, statistically, will have experienced it themselves.

When I learnt of the opportunity to participate in NAWO’s latest cycle of the YWA Advance programme and contribute to its work in the fight against gender-based violence, I knew immediately that I wanted to be a part of it in order to voice my own opinions in this very important discussion.

Soon after starting to work on the project, I was forced to realise that the challenges some women face are beyond gender, and that incorporating this perspective is the only way that we can combat sexism. Women have a duty to not only speak out against the oppression we face as individuals, but to consider the treatment of all women, ensuring that we empower all and not just some.

Our work made me consider the power of what we can do with our voices. I learnt that even if you are unable to fight back in the moment, when you are caught off guard, you should not be discouraged from later speaking out. It highlighted that, although the effects of taking action may seem transient to some individuals, it is important to consider what you can do to speak up for yourself, or other women. 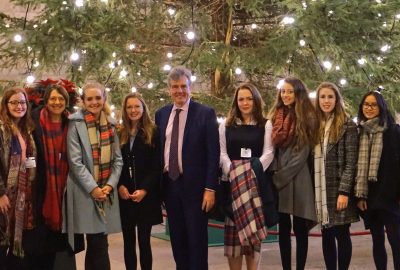 particularly became more aware as to how we can invoke change at all levels. Every step towards change is worth taking, irrespective of whether it reaches a few people or hundreds, or whether this work focuses on raising awareness, lobbying, or fundraising. I am grateful to have been enabled to bring the experience that I gained to my school through holding my own events, educating younger students as well as my peers. The discussions that I had with students during my presentations on the SDGs, human rights and how we can implement change were insightful, and affirmed that young people are ready and willing to engage and take action. I enjoyed speaking about these issues at school, which was a different form of activism for me, and one that I had not previously considered before.

On the 30th November, our work culminated with the events we held at the Houses of Parliament, during the 16 days of activism against gender violence. I was on the panel of Young Women’s Voices Against Violence, speaking about the messages that governments send about gender through legislation, which imply that sexism is acceptable.

I was particularly enthused by Eilidh Whiteford MP’s contribution of the idea that teaching consent to young children is imperative in preventing violence against women. The NSPCC’s advice on how to make this part of sex education age-appropriate is a great example of how children can be shown from a young age that they must vocalise what they are dissatisfied with. It is a message that society needs to instill.

Actions that we can all take

The platform we were given highlighted the importance of having the opportunity to voice our opinions; they matter and can effect great change. Organisations can benefit from increasingly involving young women and putting them on a platform through which their voices can be heard. The knowledge and experience we gained in vocalising our opinions as delegates of the YWA Advance programme exemplifies this. Having young women at the center of campaigns for change demonstrates to other young women, as well as every other member of society, that we can all be aware, active, and make significant contributions to bringing about change. 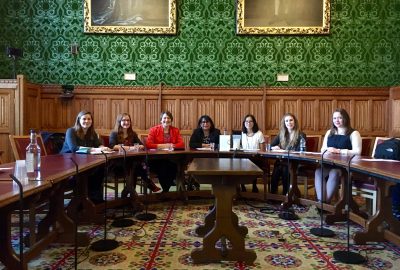 It is also clear that we need education that encourages boys and girls to talk about gender-specific issues. In our schools, we raised awareness about the commitments the governments made in September 2015 (in adopting the SDGs), what they mean for gender equality, and how we can ensure that government is held accountable for them. People can easily email their MP requesting for government to uphold this, and enquire about what is currently being done; NAWO have even written a template letter that you can simply sign, to urge government to ensure the progression of the rights of women and girls. People in power, such as MPs, cannot implement the changes we want unless we tell them how we want to be represented.

Here is something that you can do

If you are an individual that wants to contribute to implementing change, please share this blog post through your social media. Making people more aware as to why women need their voices heard, to vocalise that gender-based violence is not acceptable, is increasingly vital. It is the time to for women to take back their voice, and for us all to come together in the fight to stop violence against women and girls.

This blog post was written as part of Mei-Jayne’s contribution to NAWO’s Young Women’s Alliance Advance programme, enabling young women to gain the knowledge, confidence and capacity to call for the rights of women and girls. The pictures of YWA delegates lobbying their MP were taken at their celebratory event in parliament on 30th November. You can find out more on YWA Advance, and the event, including human rights organisations and parliamentarians in the Houses of Parliament on 30th November 2016 here.