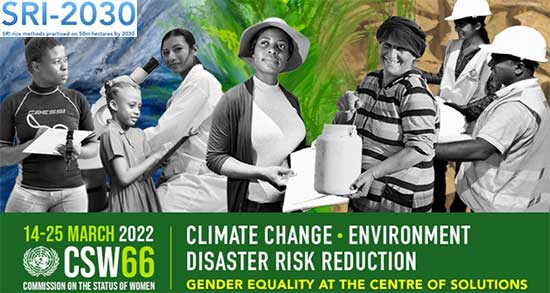 By Alice Fookes: NAWO Trustee
Contact Alice to find out more or to request a SRI speaker at a CSW event – alicefookes@hotmail.com

The CSW 66 Priority theme is Gender Equality in the context of Climate change, environmental and disaster risk reduction policies and programmes.

With this in mind I thought you might be interested to read about this programme, SRI-2030 ( which centres on disaster risk reduction and at the same time increases yields bringing more profit and food to subsistence farmers.
These farmers frequently include a growing number of marginalised women such as single women, widows and disabled women. This increase is due to a combination of factors, not least the 3 C’s: climate change/disaster, coronavirus and conflict

So what is SRI?
SRI is a way of producing rice that empowers women and men. The method of growing is less physically taxing (instead of being up at 1 am to farm the rice, this method requires her to be in the rice fields at 7am). Far less water is used and the women who gather much of the rice harvest no longer need to have their feet, legs and hands in the water. Because each rice seed is given more space it grows more strongly and produces a much better yield. A profit can be made and spent on school fees, next year’s seed, healthcare etc.

The sheer number of women, in particular marginalised women, involved in growing the global rice crop is greatly overlooked.
Women’s health risks in traditional rice production and its implications for current and sustainable food security is why SRI needs greater publicity.

However, because of cultural and traditional norms, women are disadvantaged in numerous other ways. Many women have less access to credit and training than their male counterparts. This is even the case in places where the feminisation of agriculture means that men are absent from agricultural production altogether.

In many countries and cultures, women are much less likely to own land or have equal rights to land or assets and often, single women are particularly disadvantaged both at a community and a political level. In some areas, the pressures of climate change and food insecurity have even led to a higher incidence of trafficking of young girls.

“Women farmers are more vulnerable to climate change impacts than men because they are often more dependent on climate-sensitive livelihoods such as rainfed agriculture and collecting water for household use. They also have unequal access to productive resources such as land and agricultural inputs, and have less of a support system to fall back on in times of crisis.”
Oxfam

“Rural women working in agriculture in the Global South face numerous challenges. Many of those challenges are shared by the whole community: food security, climate change, a loss of biodiversity and tribal rights are issues that face men, women and children alike.”
SRI4women.org

A significantly neglected issue for women, however, is health. Because of the tasks they perform in rice growing, women suffer serious health problems that SRI can help to either reduce or eradicate altogether. With SRI, rice fields are no longer kept constantly flooded, reducing or eliminating women’s prolonged exposure to water-borne disease vectors, carried for example through mosquitoes, snails, and leeches. And with SRI, women spend much less time in stressful postures carrying out repetitive movements for longer periods of time and as a way of life. Studies have also shown that mechanical weeding tends to lead to an increased participation of men, as in some cultures, men are expected to do any agricultural operations involving mechanical or motorised implements.

With its higher yields, reduced inputs, production costs and labour for women there is a strong a case for suggesting that SRI can address some of these factors. Once women start producing rice on a significant scale on the same plots of land, one observed consequence is that they start to enjoy a greater status in their families and within their communities.

About SRI
SRI-2030 is a movement initiated by The Downforce Trust. The Trust was established in 2020 to accelerate the transition to Net Zero, and specifically to halve global GHG emissions by 2030.
SRI-2030 is inspired by the creator of the System of Rice Intensification, Father Henri de Laulanié; and the work of Professor Norman Uphoff of Cornell University and his colleagues Olivia Vent, Lucy Fisher and Professor Erika Styger.

Read More:
SRI & Women
The Story of Women Farmers in India Is That of Double Jeopardy – Being a Woman and a Farmer

SRI practices are based on agronomic principles that harness optimum growing conditions for rice plants.
These practices are very different from how most farmers have been growing rice for generations, and therefore require a shift in mindset; this can be the biggest obstacle to adoption. A key principle is ‘feeding the soil’ organically rather than ‘feeding plants’ chemically. The four main practices involve planting younger and single seedlings, at wider spacing in rows, in fields that are not continuously flooded, and promoting soil health. These steps are applied as best possible under farmers’ respective conditions. Farmers find that the more steps they implement the better the yield. They have also found that the health of both plants and soil are improved.
SRI & Women